Between the Earth & Sky 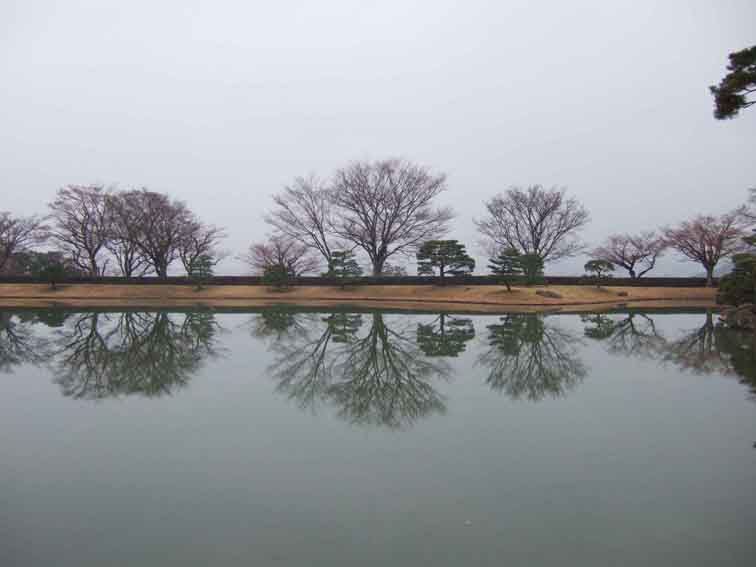 This villa sits in spacious grounds at the foot of a mountain. The large site consists of three separate villas with gardens, referred to as the lower, middle and upper villas for their locations at different elevations on a hillside of terraced rice fields. They are connected by paths along which pine trees are neatly planted. The villa’s highest spot features views that change constantly as you move along, as seen in the case of Kiyomizu-dera Temple. Controlling the view is the most important factor here, and the dramatic scenes of the upper villa were designed with careful attention to this.

First, you will visit the lower villa. This is centered around a pond, and brooks, trees and stones are arranged to create a garden on an immense scale. From the building facing the garden, you can see a whole overview of these neatly arranged natural elements and the very pleasant contrast between the moss and the white gravel. After viewing this garden and opening the door in the bamboo fence to exit the first villa, the vista opens up wide. Pine trees line the path ahead over the gravel plain, and the mountain looms over the site. The villa was originally built and surrounded with a fence as if to intentionally produce this dramatic change of vista.

Progressing along the path of pine trees, you will reach the middle villa. The garden of this villa is basically the same as that of the lower one, and was also designed around a pond and brooks. The interior of the building is somewhat richer than that of the lower one. Incidentally, there are a number of well-trimmed hedges planted around the gate of the middle villa to restrict the view. These are taller than humans, and close inspection reveals different kinds of leaves in the tangled mass of hedge. Having these different kinds of leaves on the surface prevents seeing between leaves, making the facade of the shrubs look richer.

Leaving the second villa, you head towards the upper villa on the hill at the highest location of the whole site. For a while, you will go up a gentle slope enclosed by pine trees, and will then see another bamboo fence near the gate to the upper villa. The villa lies inside this fence. Passing through the gate in the fence, you progress up a flight of narrow stairs. Low shrubs are planted on both sides of these stairs in a way that drastically limits the view. While climbing the stairs, you cannot see anything except the stairs themselves, the shrubs and the sky. As you move upward, the height of the shrubs gradually decreases and the view begins to open up. On reaching the top of the stairs, there is a building directly in front and a wonderful panoramic vista to the left. On the top of the hill, you look down on a big pond and the mountain and sky over it. Reaching this spot is clearly the highlight that the previous walk was building up to. The planner of the garden may have wanted to let people see only this panoramic view, and may have made the other garden just to emphasize this scene.

The upper building is located at the highest part of the site, and the big pond is also located at one of the highest locations. After going down the stairs, you walk along the shore of the pond and reach a spot with another impressive view. In this spot, the pond and the sky spread out in front of you, and between the pond and the sky are low shrubs, planted trees and paths. The sky and the vegetation are reflected in the gigantic mirror that is the surface of pond, so the path appears caught between the real sky and the reflected sky. Seen from the other side of the shore, it seems as if the path is floating in the sky.

The designer of the villa took great advantage of site’s characteristic hillside view in a surprising way. Although garden ponds are generally located on the lower level of a site, in this case it was placed at the highest level so that the surface of the pond acts like a big mirror joining the ground and the sky. It appears the designer must have had a deep love for the sky.