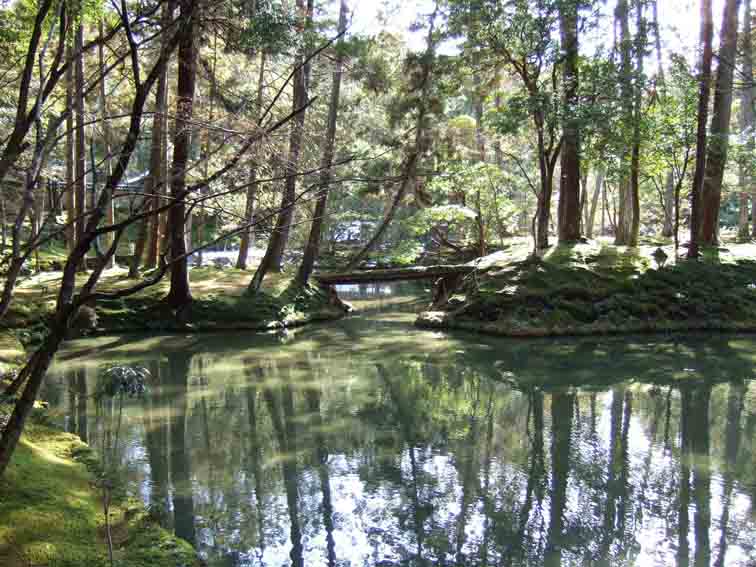 This temple is located to the west of Kyoto, and takes about an hour to reach by bus from Kyoto station. It is primarily famous for its moss; the surfaces of the soil and stones are completely covered with beautiful moss due to the favorable natural conditions found there, and its beauty is well worth seeing in addition to the Katsura Imperial Villa. Moss is indispensable for Japanese gardens, adding an air of mild beauty. Now, let’s see the beauty of the moss, water and stones.

The garden in this temple consists of an upper and a lower part. In the lower part, there is a pond surrounded by moss-covered soil and trees. In the upper part, there are many ragged stones placed on the hillside to create an imaginative waterfall.

Before seeing this garden, visitors go to the office and chant prayers to the Buddha in the main hall with the Buddhist monks for a short time. After that, the person in charge leads you to the entrance of the garden. Going inside, you are pleasantly cocooned in a gentle atmosphere of sunlight filtered by the many leaves and the verdant green of the moss and trees. The branches and leaves of the pine, maple and oak trees partly shut out the sunlight, creating one of the conditions favorable for the carpet of moss. It is somewhat dark inside the garden, but sunlight comes through the leaves onto the moss, causing it to glow in the dim greenish-gold light. As entry to the garden is strictly limited by the need for advance application, it is very quiet, and the only sound to be heard is that of birds singing.

The pond is located at the heart of the lower garden, and creates a magical atmosphere. Part of the pond’s surface is in the sunlight, while the rest is in the shade as the trees around it partially block the light. The scenery around the pond is also reflected in the mirror of the surface, causing unreal pictures to appear in it. The dark and bright areas and the unreal reflections are all mixed together on the surface. Adding to this mixture the moss at the bottom of the pond that can be seen through the crystal clear water makes for fantastic scenery. When ripples appear in the surface, the pictures reflected in the water also ripple, softly disturbing the tranquility. In this way, the water in the garden contributes to richer scenery.

Seeing the garden in perspective, the moss appears to cover the ground like green velvet. The sunlight through the leaves sometimes changes the veil of light green to gold. Looking carefully at the rugged moss-covered surface, it seems almost like a microscopic world.

After walking along the path, you will go up the stairs and see the stones placed on the hillside. Some are covered with moss, and have a gentle yet solemn and magnificent appearance. The placement of these stones shows the flow of the waterfall. They are, incidentally, generally at their most beautiful just after rain when they are wet and exude a mild black glow, especially the round ones. The water touching the surface of the stones seems to bring out another kind of beauty from inside them, changing them from a rigid air to a mild and gentle feel.

In the lower part of the garden, the moss interacts pleasantly with the sunlight while the mirror of the water creates a fantasy world. In contrast, the many stones of the upper part of the garden create a rigid world which is softened by the rain. These natural elements are what makes up the atmosphere of the garden.