The Shape of Roofs 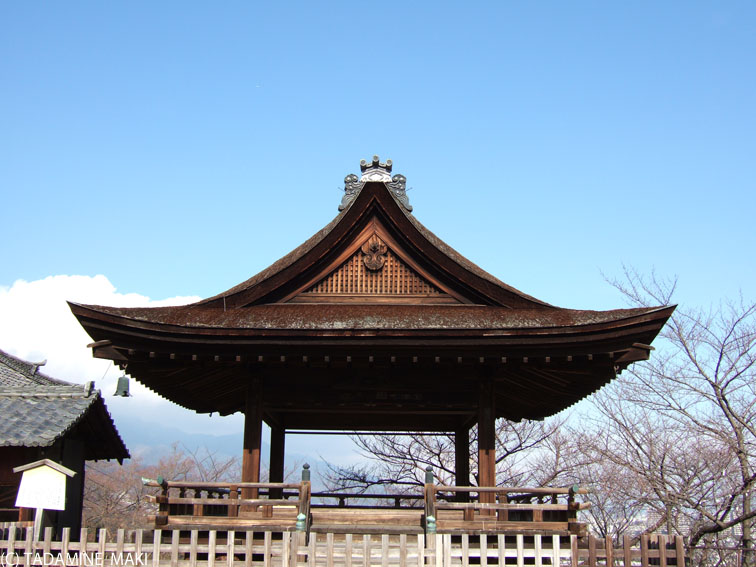 This temple is located on the outskirts of Kyoto city near Biwa-ko Lake, the largest lake in Japan. The precinct approach is lined with lots of trees, the tender green of new leaves creating a leafy shade over it. Moss completely covers the low stone walls along the path, and quietness softly envelops the precinct. What attracts more than anything else is the buildings with their elegantly shaped roofs and feeling the beauty of these cypress-shingled structures.This is the best place to enjoy the beauty of such roofs.

Many carpenters say that the high point of traditional Japanese architecture lies in the curving of its roofs. When building structures, more energy is focused on creating elegant roof curves, and this has a significant influence on the appearance of buildings.

The overall atmosphere of cypress-shingled buildings is light and sharp, as the roofs are made from bark rather than tiles. Viewed from the front, the outline of the eaves is not straight but rises a little on both sides. This is because if the outline is completely straight, it appears to droop at the sides, which doesn’t look good. The rising curved line has the effect of increasing the sharpness of the building overall.

Incidentally, Japanese roofs protrude considerably from the outer wall, and their eave brackets are quite large. Junichiro Tanizaki, one of the greatest novelists in Japan, said that roofs in Japan were like umbrellas, while those in the West were like hats. The role of the space under large eave brackets is an obscure one, but is very important in Japanese architecture. The space is neither inside nor outside; although it is part of the outside of the building, it is spatially and functionally under the building’s influence. The large eaves protect against sunlight and rain, like umbrellas, and even prevent these elements from coming in through open windows, while allowing wind to enter.

If a garden is located around a building, larger eaves can spatially connect the garden and the building in a gentle way, thus bringing the garden under the influence of the building.