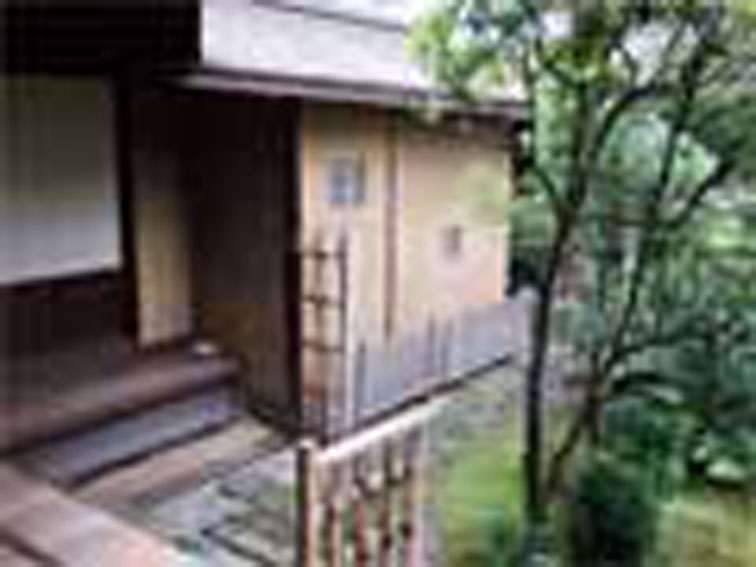 This teahouse was built by Senno Rikyu, who greatly contributed to founding the culture of the Japanese tea ceremony and whose aesthetic sense has greatly influenced Japanese culture. In the tea ceremony, the hosts serve their guests according to a fixed series of actions, and both create the atmosphere through their behavior. Along with this behavior and the interior and exterior of the teahouse, a number of tools and simple ceremonial decorations largely make up the aesthetic of the tea ceremony. The essence of the aesthetic of Senno Rikyu is that the investment of a great deal of time and effort makes ordinary materials supreme, that beauty comes from daily objects, and that beauty occurs simply and unnoticeably. Now, let’s go and see this small house of infinite expanse.

The teahouse, measuring roughly 1.8 cubic meters, is the smallest of its kind in Japan. In this small space, the host and guest used to perform the tea ceremony facing each other sitting on tatami mats. The reason for holding tea ceremonies in such a tiny area was that, together with the minimal decoration in the house, the actions of the host and guest make the space more tense and in turn increase the solemnity of the ceremony. To make this kind of space, every material was carefully selected, and the width and location of the opening as well as the area and height of the room were designed in exquisite balance. Incidentally, this house is sadly not open to the public, but is limited to viewing from the outside for reasons of protection.

To enter the house, guests would use a small sliding door of about 70 square centimeters known as a nijiri-guchi. Due to the size of the door, people had to bend down to enter. There are two main reasons why the entrance was made so small: Firstly, a smaller entrance makes the interior look larger than it actually is because the eye level is lower than usual, making the ceiling look higher. Secondly, the designer wanted to make a window above the door, and with a normal-size door this would not have been possible.

Visitors can look at the inside from the nijiri-guchi. The spread of the inside is only two tatami mats, so only a host and a guest would sit on the mats and enjoy the ceremony. This size was determined by considering the movements made during the ceremony and cutting out all needless space. Consequently, a tense atmosphere is brought out between the host and guest.

Towards the front of the entrance is a niche known as the Tokonoma, where a hanging scroll is displayed. This space usually features hanging calligraphy, an ink painting or a simple floral piece in a vase. Such small decorations can add variety to the space.

On the outer wall are three windows. Unfortunately, we cannot enter this house, but its highlight is the light from the windows. Entering the house and closing the door, light enters only through these windows, which are covered with a thin white paper known as akari-shoji that serves to soften the light. The light from the outside forms a lattice pattern of bamboo on the thin paper. Just these three small windows lighten the room, and the exquisite balance of their size and position gives the inside a mild brightness. The different and irregular range of hues inside the house is determined by the position of the windows for the movements of the tea ceremony.

The ceiling height of about 170 centimeters was set in consideration of how small the entrance is. It does not feel low because people are not expected to stand up in this room, only to sit down. A high ceiling would only serve to stress how small the room is. The height of the ceiling above the host’s space is lower than that for the guest, which slopes along the roof. This height difference is to prevent any feeling of oppression.

Looking at the inner surfaces, the walls are plain and crude earthen affairs containing straw, which was originally used to prevent walls from cracking, but was used here by the designer for a feeling of simplicity. The walls also cover the pillars at the corners of the room, which are not usually veiled. Hiding these pillars makes the room feel larger.

A number of devices are used to make the room feel larger: the size of the entrance, the height of the ceilings, the veiled pillars at the corners and the light from the windows serve to make the space feel like an infinite expanse.

One of the features of Japanese aesthetics is abbreviation. As things become more sophisticated, they become less, smaller and lighter (rather than becoming more, bigger and heavier). For this to happen, the value of each material needs to be truly evaluated and a sense of balance applied. Here in the Taian Teahouse, the smallness of the room and the simplicity of the interior express a supreme sense of balance.