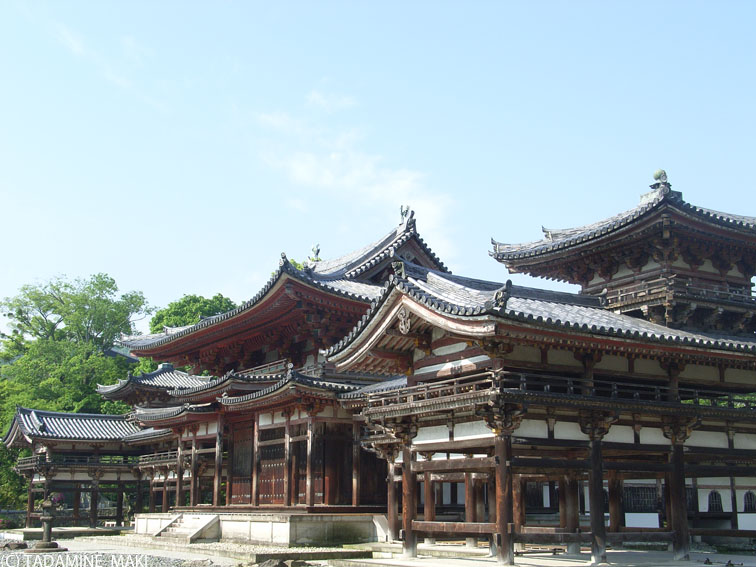 The impressive appearance of the main building is quite familiar to most Japanese people. They see it at least once a day as it is engraved on the ten-yen coin. The architectural composition here is excellent, and its inherent sense of balance makes it truly one of the best temples in Japan. It was built in the 1000’s by the aristocratic rulers of the day, at a time when society was very unstable due to years of continuous plague, religious superstition and a vortex of war with no end in sight. With such desperate conditions, people earnestly hoped to at least go to paradise after their death. This temple was built for such wishes, and therefore both its interior and exterior display images of paradise. Now, let’s take a look at the building itself, the relationship between the building and the pond, and the images of the Buddha.

On entering the precinct and walking for a while, you see the main hall over the pond. The hall is flanked by arcades and pavilions, creating the impression of a phoenix. The second story of its arcades is ornamental and has no function at all. Each piece of the framework is joined together in exquisite balance, creating a superb beauty. If any of the parts were too large or too small, the whole building would be thrown off balance.

This building has a presence that is dominating without being overwhelming. The reasons for this are, I think, threefold: the wings without walls on either side serve to considerably lighten the perceived mass of the building; a big pond is located just in front of the structure; and the size of the columns and other parts appears small in comparison with the size of building.

Seen directly from the front, the architecture appears perfectly symmetrical despite its highly complicated appearance, and changes dramatically depending on where you stand. The components and parts are organically bound to each other. Known as Phoenix Hall, the image is of a building about to take off.

There is, incidentally, a big pond just in front of the building. Why is this here? Ponds in the gardens of temples or villas are quite common for a number of reasons. One of these is that people wanted to enjoy the scenery effectively, and putting a pond in the center of a garden reflects the scenery in its surface like a large mirror. People can also walk around the pond and enjoy the changing of scenery from a range of different viewpoints. In this case, however, the pond was made for religious reasons. Seeing the building over a pond places a special emphasis on the building as paradise, and the pond was used to show off the structure as the next world.

each of which rides airily on a cloud and carries some kind of instrument. These images also show Paradise, the Pure Land. They have very peaceful faces, and their appearance is small and sweet. Although the paint on the inside has come off completely and it is now difficult to imagine, the building was originally covered with many colorful patterns.

The relationships between the structure, the pond and the images apply just as much to the words, lightness and modesty, as well as to the dynamic and rhythmical elements found here. People in those days expressed paradise in this way. On both sides of the roof stand a pair of ornamental phoenix, a symbol of peace and prosperity, responsible for the temple’s name as well as its physical appearance. The temple is a symbol of the time when it was built.