The Aesthetic Sense of the Commom people 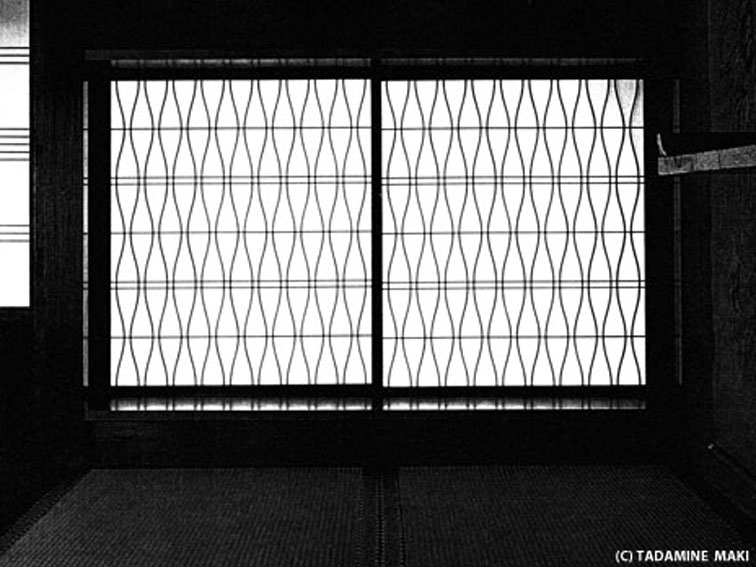 This two-story building was built more than 350 years ago in the town of Kyoto. In those days, men would have dined, drunk and played various cultural games with intellectual women in the building. They would also have enjoyed playing or listening to music and writing waka and haiku, both of which are types of Japanese poem. There would have been many houses like this at the time, but only this one remains.

The building has three features: lightness, darkness and decorativeness. Lightness and darkness are general features of Japanese traditional houses, while decorativeness is one of the natural aspects of Kyoto culture in a way. The house therefore contains the characteristics of traditional houses as well as one of the characteristics of Kyoto culture. Now, let’s look at this house.

In traditional houses, a kind of sliding papered door known as an akari-shoji is used. This kind of door lets sunlight into the room through the thin paper, but blocks the view. It is made of a wooden frame, bars and white paper. Thin wooden bars are set into the wooden frame, and thin snow-white paper is pasted onto them. The bars are normally crossed vertically and horizontally at a certain distance, but in this building some bars are crossed diagonally, and others are curved like waves, a technique which requires very sophisticated skills. A range of patterns is elegantly drawn on the pure white canvas of the akari-shoji using wooden bars, and these remarkable skills have transformed such sliding doors into beautiful works of art.

The appearance of akari-shoji during the day differs from that at night. In the daytime, the outside is lighter than the inside, and sunlight passing through the whiteness of the akari-shoji changes to a gentle snow-white light, with the shadows of the wooden bars clearly silhouetted against the whiteness of the paper. In contrast, at nighttime when it is completely dark outside, the dim candlelight in the room illuminates the akari-shoji, and the softer brightness of the candle emphasizes the sharp lines of the wooden bars against a warm, soft hue of orange-tinged white. This is the subtle and profound world of black and white ink painting.

It is generally quite dark inside old Japanese houses such as Sumi-ya, providing a sharp contrast with the brightness found inside modern houses. However, darkness does not necessarily represent inconvenience. First, the dimness of incandescent or candle lighting has a relaxing effect on people. Japanware, a traditional craft product of Japan, was generally made in dim lighting, and its inherent beauty can only really be appreciated when it is used in a dim space. This dimness is part of the essence of Japanese architecture.

On the second floor are some decorative rooms, each of which has a different taste. In one room, the shape of a fan is used as a design pattern, while in another the ceiling and walls are designed in a diagonal pattern. Another room is decorated with beautiful blue-colored shells in a Chinese flavor.

Sumi-ya is a precious heritage, retaining the essence of Japanese culture, lightness and the darkness and the decorativeness of Kyoto culture.