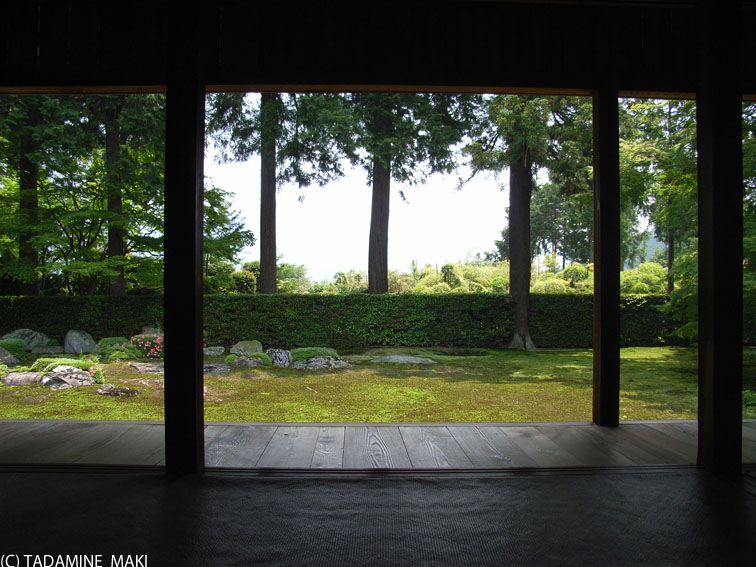 This temple is very famous for Shakkei, or borrowed scenery, a masterful technique of garden design that merges the surrounding natural scenery into the garden itself. Along the veranda, no buildings can be seen, only natural elements. Other gardens of this kind were made in those days, but only this one remains in its original condition. The main element of the scenery as viewed from the building is not the garden itself but the mountain, Mt. Hiei, that stands beyond it. This mountain is noted not only as a mecca of Buddhism (just as Assisi in Italy is one of the meccas of Christianity), but also as a place to be revered. The garden was arranged connecting the outer natural elements with the inner in the middle of the mountains, and all elements are composed in exquisite balance. Now, let’s look at the masterful symphony of the inner and the outer.

Going inside the building and passing through the hallways, visitors can sit on the floor facing the garden to view it. At first sight, the garden looks quite typical. The ground is covered in moss, with stones and round-trimmed shrubs arranged on the bed of moss, positioned low so as not to hinder enjoyment of the outer scenery. Other low hedges are immaculately arranged as a visual border, crisply surrounding the garden on three sides. Around the low shrubs, big Japanese cedar trees grow straight up, breaking the horizontal lines of the shrubs, and are trimmed quite high to enable effective viewing of the natural surroundings. Bamboo groves and the mountain stretch above the shrubs and trees. Moss, stones, shrubs, trees, bamboo groves and mountains are all common natural elements in Kyoto, but here they are seen to the exclusion of everything else.

The garden was originally created as part of the villa of Emperor Gomizuno-Tenno. He also built another villa, the Shugakuin Imperial Villa, and had an extraordinary sense of aesthetic as a garden planner. He had been searching for a place with a panoramic vista for a full 12 years. This extreme love for the aesthetic was mainly related to his position as Emperor; the era was the turning point in Japanese politics, when political power shifted from Kyoto to Edo (now known as Tokyo). At that time, the Shogun in Edo passed a law to undermine the power of the Emperor in Kyoto and relentlessly exerted pressure over him to weaken his influence over the religious world. His overcrowded thoughts on how to maintain control of authority brought him to concentrate on searching for a suitable site and creating such a masterful garden.

Looking at the garden for a while, you may hear the noise of shovels working and bulldozers moving outside, invading the tranquility of the area. The zone beyond the bamboo groves is being developed as housing lots, and the construction of buildings is slated to start in the near future. If this construction goes ahead, the perfect composition of natural elements made by the Emperor around 350 years ago will become just a typical Japanese suburban scene.

In the middle of the mountain, elements of S-size (moss and stones), M-size (shrubbery and trees), L-size (bamboo groves) and XL-size (the mountain), have been carefully arranged. Just as the pond at the upper site of the Shugakuin Imperial Villa functions as a big mirror bringing the whole Kyoto sky into the site, the natural frame formed by the hedge and trees in Entsuji Temple brings the mountain inside the garden. In those days, how would Emperor Gomizuno Tenno have felt, viewing the mountain as the mother of Buddhism in Japan?