The Garden as a Campus 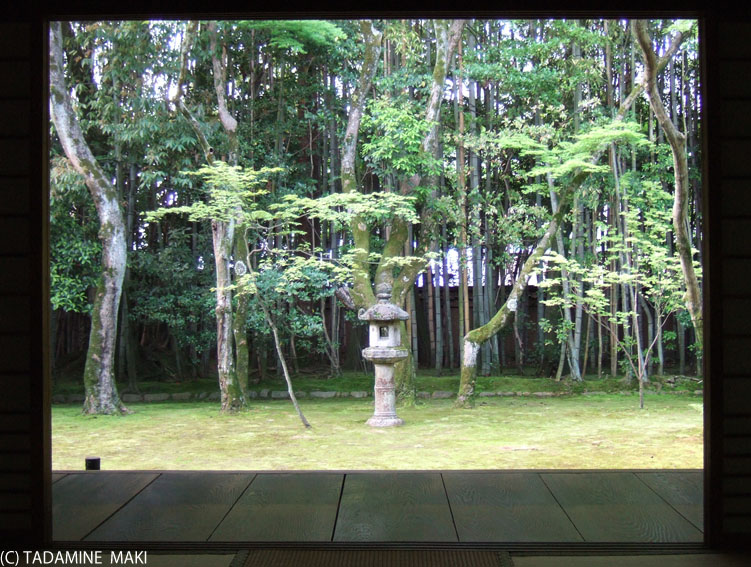 Points of View
(1)Comparing natural elements with bigger imaginary scenery
(2)Seeing only the part, not the whole
(3)Natural elements seen from the buildings


In Japan, gardens, as well as buildings, play an important role in temples and residences. At one time, gardens accounted for a large part of residential sites and were used as places for enjoying doing pleasure boating, playing music and reading poems. However, Zen Buddhism, imported from China, influenced gardening in such a way that gardens came to be made in small blocks simply for viewing and contemplating. During the Edo period of 140 to 400 years ago, feudal lords loved to make big gardens with big ponds for playing and walking around.

This temple is one of the most famous Zen temples in Kyoto. There are more than ten sub-temples in the complex, but only four of them are now open to the public. They contain many typical Zen gardens that are relatively small, covered with white gravel, and contain arrangements of stones. These gardens are used as a canvas, while natural elements are used as a tool to express Chinese thought via the Japanese aesthetic. Some of them are simply covered with moss. Gardens, therefore, have changed from mere places of pleasure into great works filled with profound thought. This booklet outlines three of the sub-temples, Daisen-in, Ryugen-in and Koto-in, thinking of these areas in terms of Zen temple gardens.

First, let’s go to Daisen-in, where there are gardens along each face of the main building. Of these faces, this chapter focuses on the eastern and southern garden where there is no water and, in its place, gravel expresses the flow of water.

Entering the building, you see the eastern garden where black stones and white gravel represent legendary waterfalls, mountains and islands in China. To the north of the eastern garden, a number of large stones are arranged in the shape of waterfalls, with the water flowing from them replaced by white gravel, and gravel also representing water covering the ground. The flow then pours into the expanse of gravel representing the sea in the southern garden.

Looking carefully at the stones in the eastern garden, their shapes appear quite unnatural but tasteful. These excellent stones were carefully selected, in the same way as those of the Katsura Imperial Villa.

White gravel and black stones express natural scenery in this garden. In those days, Zen monks trained in the building surrounded by the artificial scenery of the garden, as they originally used to train in the middle of nature. The comparison of the gravel and stones to the scenery in China brings an image to these natural elements, so the objects make people contemplate. Putting them within the context of the garden makes them more than just natural gravel and stones.

Next, let’s go to Ryugen-in. On entering the building, you first see a tiny garden enclosed by hallways. This garden consists only of white gravel and a few stones. The design formed by the gravel and stones shows a water drop falling into the water and the concentric rings of the ripples it causes. A miniscule world is magnified and drawn here.

This garden is much smaller than any of the other gardens in Kyoto, but is made the best use of through zooming into a fraction of a miniscule world and blowing it up to an extra large size. There is no need to express the full picture in such a small space; enlarging a miniscule world in this small garden leads to a bigger world. When scenery shifts from the real world to the imaginary world in one’s heart, it spreads infinitely.

Finally, let’s go to Koto-in. This is noted for the beauty of its maple leaves, bamboo and moss, and a modest atmosphere pervades the garden. From the veranda, you see a number of maple trees growing in the garden, moss completely covering the ground, a stone lantern standing in the center and lots of bamboo outside towering over the garden. From outside the garden, gentle sunlight pours through the verdant green of the leaves into the courtyard.

The stripes formed by the bamboo outside the garden emphasize the curves of the maple trees inside. The artificiality of the stone lantern in the garden contrasts pleasantly with the mildness of the surrounding natural elements, while the moss covering the ground blurs the boundary between the ground and nature.

It is better to view the garden sitting at the back of the room on the tatami flooring rather than from the veranda. This is because the veranda is a little close to view the garden, and too much proximity may sometimes give an unnecessary amount of detail. In general, to view works of art such as paintings, photos and sculptures, one needs to keep an adequate distance from the work, and this also applies to viewing gardens. Sitting at the back of the room, the columns, threshold and sliding doors function as a frame, limiting your sight of the view and keeping you a certain distance from the object. The distance filters out the details in the scenery, and the scenery changes the representational into the abstract.

The highly prominent roof over the veranda protrudes into the garden as if it covered the whole area and pulled the garden in towards the building. Seen from the opening inside the simple building, the garden could be taken for a nice, simple painting on the wall.

We can therefore see that gardens have a variety of possibilities. In Daisen-in, the effective arrangement of stones enhances the incoherent beauty of the stones themselves and creates inexhaustible images, comparing gravel and stones with natural scenery. The garden in Ryugen-in has the feeling of an unlimited expanse of mental pictures, enlarging a miniscule world into a small space. The one in Koto-in seems to be a kind of picture, with amazing seasonal changes in nature.

The West has made the most of truth, while the Chinese have goodness and the Japanese have beauty. These gardens are a highly integrated beauty, consisting as they do of natural elements.