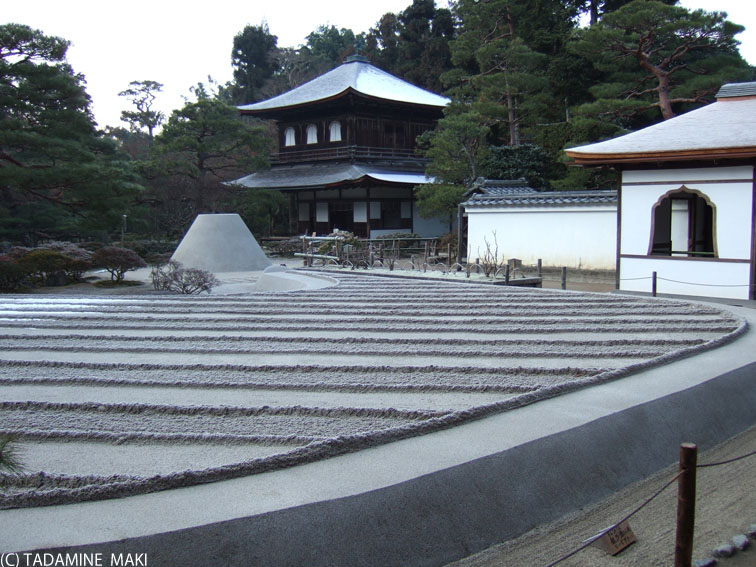 
Usually, Japanese gardens are designed to combine the aesthetic elements of the natural and the artificial. As a matter of course, such gardens cannot be made simply by fencing off trees and grass that grow naturally, or by just placing rocks, sand and gravel. They are designed to be built by bringing out the advantages of nature and by setting out natural elements, trees, stones, bamboo etc. Now, let’s take a close and careful look at the garden, considering how the Japanese have taken advantage of natural elements.

On arriving at the front of Ginkakuji Temple, you see an approach forward, paved with glowing black stones. Over this pavement is a roofed gateway through which visitors pass, and then walk along a remarkable path covered with pristine white sand and surrounded by high, well-trimmed hedges. The darkness of the black stone pavement contrasts with the whiteness of the approach covered with simple sand, and the high hedges limit the range of view and movement. The walkway ends at an admission booth at the entrance. On entering this complex, you first glimpse part of the garden through a bell-shaped opening in the wall. In perspective, the whole garden is surrounded by many Japanese cedar trees on the hill, towering outside the garden. Although the garden is surrounded by a forest of tall cedar trees, it doesn’t have a sense of being hemmed in.

Two sculptured objects, immaculately formed from white sand, sit in the center of the garden surrounded by many curving pine trees. One of the objects looks like a truncated cone, while the other is a lower horizontal mound with a striped surface. Both of them are designed linearly, geometrically and simplistically in comparison to the surroundings, and look like conceptual works of art. Next to these objects are two wooden buildings with an older appearance, their surface black through oxidation over time. Standing behind these new modern objects, the age of the structures can be clearly seen.

What on earth are these sand mounds? The answer may occur to you when you close your eyes and imagine a fine night. On clear nights, the moon shines gently down on the mounds and the truncated cone in turn shines like the moon, the other like a pond. Fantastically, a moonlit night makes this illusory moon and pond come out in the garden along with the real ones, and when dawn breaks, they disappear.

Visitors cross a tiny stone bridge over the pond and walk up the stairs towards an open-view area. The soil along both sides of the stairs is covered with moss, and thick roots occasionally make a brief appearance through this carpet of moss. These roots cling to the earth tightly, while the moss wraps around the earth softly.

Reaching a vast viewing spot on the hillside, one can look down on the whole garden and a number of structures. Seen from up there, the garden seems to be covered with pine trees. The two buildings next to the sand objects stand side by side with their cypress-shingled, sharply-curved roofs.

Going down the stairs and looking at the outside, visitors can see bamboo fences at the border and a large array of vertical lines formed by Japanese cedar trunks over the fences.

Returning from the hill and looking at the whole garden, you can see the tall, straight trees standing outside the garden and the pines with twisty branches inside it, the two standing in contrast with each other. As the tall cedars outside are vertical and pruned quite high, it looks as if they stand as fences within the site. This may be why the garden looks larger than it really is.

The surface of this garden is partially covered with several varieties of moss, but seen from above seems to be covered with pine trees. The contrast of the moss with the pine trees; whether the garden is covered with one or the other varies according to the viewpoint.

A variety of natural elements that accent each other exist in this garden. The black stone pavement and the path covered with fine white sand, the wooden buildings and the white sand objects, the real and the illusory, the roots and the moss, the cedars and the pines, the artificial sand mounds and the surrounding nature. Comparing one object with its opposite brings out the character of each.