A Garden for Thinking 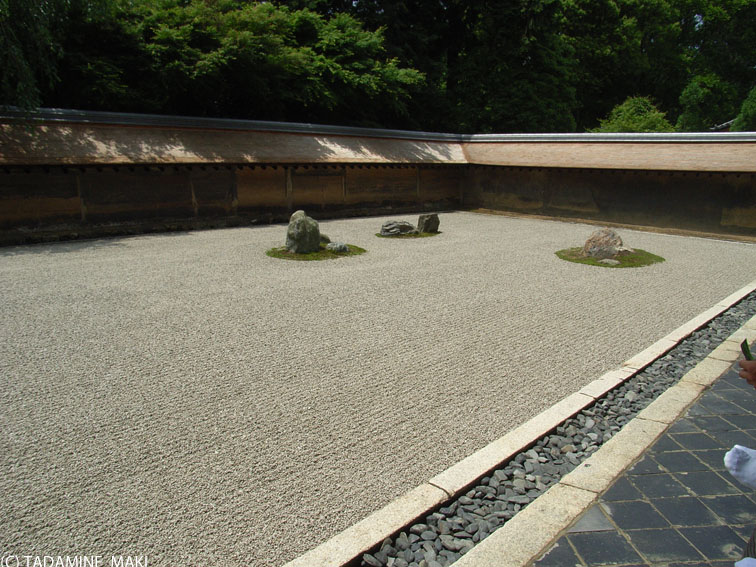 
Ryoanji Temple is very famous for its Zen rock garden, and some people reportedly go to Kyoto just to see this garden. As a young boy, I could never really understand why people liked this garden so much, though I had seen the original several times. In the garden, just fifteen stones are placed in a sea of raked gravel, free of vegetation except for a little moss. However, having visited several times as an adult, I am finally able to enjoy the unique taste of the garden, and have found it a place for thinking rather than for just looking. A number of conditions or tricks make it a garden for thinking. Now, let’s explain this garden.

Entering the precinct and passing along a pond, you will reach the building with its famous garden. Passing through a gateway, you walk through a hallway and find the Zen rock garden in front of a veranda. A scattering of fifteen stones with moss around the base sit on a plain surface of raked white gravel enclosed by a clay wall. The simple garden is composed entirely of white gravel, rocks and moss. The low surrounding wall borders the garden on three sides and works as a picture frame. The enclosure of the garden within the wall separates it visually from the surrounding natural elements, focusing people’s attention on the inside of the garden rather than the outside.

As above, fifteen stones sit on a plain of white gravel. Such stones are quite common in Japanese gardens. The garden is designed for thinking, and has no particular image; people are expected to look at it and interpret it freely. Just fifteen stones can make people think deeply or differently due to their exquisite arrangement. At least one of them remains hidden from any point on the veranda, an arrangement ensuring that the view from the veranda is quite different depending on the viewer’s position. The masterful composition of the stones means that visitors can view the garden many times without being bored. Thus, every time you look at the garden, you can take it in with a different frame of mind.

Similar conditions are often viewed differently depending on the viewers themselves or the point of view, just as in the case of living theater. Some musical enthusiasts watch the same performance over and over again. At first, I could never understand why somebody would watch the same thing so many times, but then one day I saw a famous musical that was very entertaining, and learned the appeal of watching performances repeatedly. For the audience, the performance is different each time; on the stage, a number of performers play their own parts simultaneously, and it is impossible for spectators to focus on each performer at the same time. While you enjoy watching one actor’s performance, facial expressions and manual movement, you cannot enjoy those of the others. Even the same performance with the same actors is different every time, and can be enjoyed differently. This is the essence of the placement of the fifteen stones in this garden: even though you see the same objects, they appear differently depending on what you think or where you sit.

Just fifteen stones are arranged superbly in white gravel. Each stone has a spatial and mutual effect, and creates a visual harmony like musical notes on a score. The simplicity of the white gravel as a canvas and that of the wall as a picture frame enhance the well-balanced composition of the stones. The garden and living theater have something in common, in terms of the same object or situation not necessarily appearing the same depending on the observer. Every time you look at a particular object, by changing the part that you look at or the position you view it from, the object seems to change and never becomes boring. The harmony of these fifteen stones creates a long-lasting beauty. Such beauty can never be boring, and thus has the ability to act as an inspiration for thought.