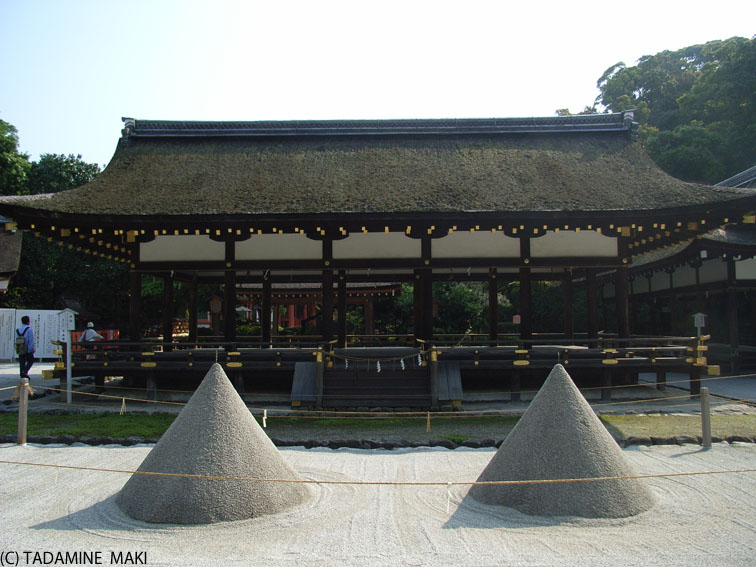 Kamigamo shrine is in the northern part of Kyoto, less than an hour from Kyoto Station by bus. Nearby is a big river, the Kamo. Rich forests surround the shrine and brooks run through the site. The bracing atmosphere of the rich natural surroundings has a lot to do with the essence of shrines. Originally, such structures were made for worshiping the ancestors and gods of ancient Japanese myths and elements of nature. This shrine worships nature itself, and this can be enjoyed by visitors. Now, let’s enjoy this shrine in terms of our senses.

Early morning is the best time here, with fresh air pleasantly pervading throughout. The bus will take you to the shrine’s first Torii, the sacred arch. Passing through it, you will see a wide-stretching approach toward the second Torii. The path is covered with fine white gravel, with expanses of lawn on each side. Moving along this approach, you will hear the noise of traffic and crows cawing, and soon you will reach the second Torii. Behind the Torii there are four buildings, and behind them are softly running brooks. Listen carefully and enjoy the sound your feet make on the gravel, the sound of the gentle brooks and the pleasant birdsong. You will realize that the traffic noise has faded away, surrendering to sounds that are more pleasant.

The four buildings are plain yet noble looking, with curving cypress-shingled roofs and no walls. These structures are made for purifying oneself before ceremonies and for ceremonial playing and dancing, and also serve as a waiting place for the Emperor. The surface is unpainted and has turned black over time, giving a weather-beaten appearance that reflects the long history of the buildings. The lack of walls, columns and beams makes a frame for the trees around the structures, and the buildings gently merge into the natural surroundings.

Going along the banks of the tree-shaded brooks or sitting by the flowing water, one feels a comfortable coolness. The water flows so gently and smoothly that the brook bed can be seen very clearly. The water here has an inherent quality of colorlessness, and a whispering sound of slow flowing can be heard.

In general, paths in Japanese shrines are covered with white gravel. Stone paving is generally used in temples, but is rather rare in prestigious shrines. Both methods aim to keep shoes clean from mud, but there is a big difference in appearance. Pavement is fixed and artificial, but gravel is not fixed and looks fresher. Pavement may decay as time passes, while gravel will remain fresh. White gravel is closer to and more intimate with the natural surroundings than pavement.

The natural elements of this shrine are also appealing to the senses of hearing and touch: the sounds of water flowing, the singing of the birds and the coolness of the flowing water. Part of a shrine’s function is to worship the gods of nature and to pray for favorable crop growth. Natural elements such as wood, water and gravel are incorporated into the shrine naturally for worship of these gods. Relax, take in the natural elements and enjoy the experience with heightened senses.